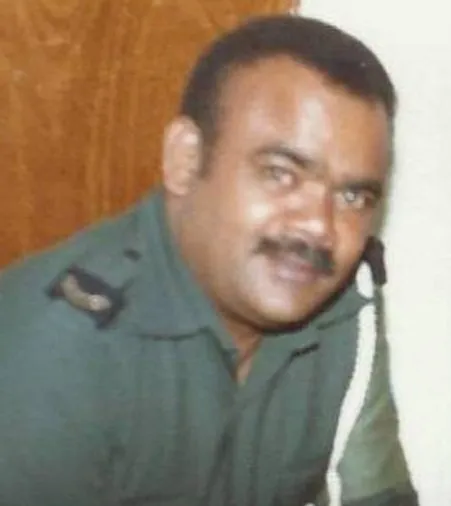 24099263 WO2 Nick Bosquet, of the 1st Battalion Gloucestershire Regiment. Nick passed away on Thursday 21st July 2022 at Southmead Hospital Bristol as a result of pneumonia and a stroke.

The Regimental Association has sent sincere condolences to the family on behalf of all members and offered assistance at the service. Having spoken to the family they have requested the Regimental Coffin Drape, and a personalised Regimental Poppy Wreath at the funeral. The funeral will take place on Tuesday 16th August, 12 noon, at St George's RC Church, Warminster, Wiltshire. Afterwards, there will be a celebration of his life at the church hall next door. The County Chairman is unable to attend as out of the country, however, his family would really appreciate any of Nicks's friends or veterans from the Glosters to attend.

After 23 years of service, with postings to Germany, Northern Ireland, and tours to Belize, Cyprus and Oman, he completed his service at the School of Infantry in Warminster. Post-service, he joined the Territorials and embarked on an extended period of study, gaining his HND in Business & Finance at Bristol Polytechnic, Accountancy qualifications, a certificate in Horticulture from Lackham Agricultural College and a qualification to teach English as a foreign language. In between these study periods, he was an accountant at Buxted Chicken Company, and then returned to Mauritius to turn his hand to farming - first tomatoes and then pigs - before finally joining the British Council in Mauritius, teaching English to adults and young learners.

After being diagnosed with kidney failure and type 2 diabetes, he returned to the UK to be near his family. During lockdown, he was admitted to hospital with gout and ended up having an amputation below the knee. Earlier this year, his other leg was amputated in the hope of stemming a recurrent infection. In between his bouts of illness, he remained intellectually sound and fought to maintain his independence, hoping to begin his application to a military retirement home. Sadly, this was not to be.